ANDY WARHOL was born Andrew Warhola on August 6, 1928, in Pittsburgh. He received his B.F.A. from the Carnegie Institute of Technology, Pittsburgh, in 1949. That same year, he moved to New York, where he soon became successful as a commercial artist and illustrator. During the 1950s, Warhol’s drawings were published in Glamour and other magazines and displayed in department stores. He became known for his illustrations of I. Miller shoes. In 1952, the Hugo Gallery in New York presented a show of Warhol’s illustrations for Truman Capote’s writings. He traveled in Europe and Asia in 1956.

By the early 1960s, Warhol began to paint comic-strip characters and images derived from advertisements; this work was characterized by repetition of banal subjects such as Coca-Cola bottles and soup cans. He also painted celebrities at this time. Warhol’s new painting was exhibited for the first time in 1962, initially at the Ferus Gallery, Los Angeles, then in a solo exhibition at the Stable Gallery, New York. By 1963, he had substituted a silkscreen process for hand painting. Working with assistants, he produced series of disasters, flowers, cows, and portraits, as well as three-dimensional facsimile Brillo boxes and cartons of other well-known household products.

Starting in the mid-1960s, at The Factory, his New York studio, Warhol concentrated on making films that were marked by repetition and an emphasis on boredom. In the early 1970s, he began to paint again, returning to gestural brushwork, and produced monumental portraits of Mao Tse-tung, commissioned portraits, and the Hammer and Sickle series. He also became interested in writing: his autobiography, The Philosophy of Andy Warhol (From A to B and Back Again), was published in 1975, and The Factory published Interview magazine. A major retrospective of Warhol’s work organized by the Pasadena Art Museum in 1970 traveled in the United States and abroad. Warhol died February 22, 1987, in New York at age 58.

Teddy Roosevelt, from the Cowboys and Indians Series 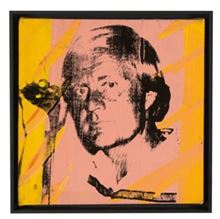 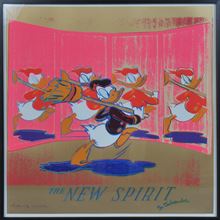 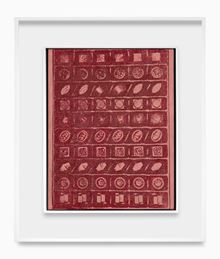 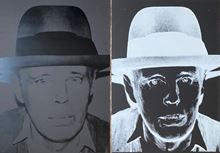 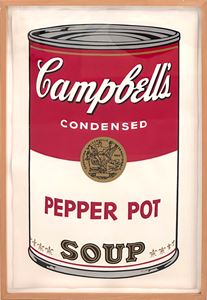