ALEX KATZ is an American painter, sculptor and printmaker, born in Brooklyn, New York on July 24, 1927. He studied (1946–50) in New York and in Skowhegan, ME. In the early 1950s he was influenced by the work of Jackson Pollock and other Abstract Expressionists and produced swiftly executed pictures of trees as well as various works based on photographs. In the mid-1950s, working from life, he painted spare, brightly coloured works of landscape, interiors and figures and soon afterwards also produced simplified images in collage. These early works emphasized the flatness of the picture plane while remaining representational, and this insistence on figuration placed him outside the contemporary avant-garde mainstream, in which abstraction and chance were key qualities. He developed his style in the portrait works of ordinary people from the late 1950s, such as Ada with White Dress (1958). This resolution of the demands of formalism and representation looked forward to the Pop art of the following decade. In the 1960s Katz’s works became more realistic and were executed in a smoother, more impersonal style, as in Frank and Sheila Lima (1965). Though concentrating on figures in interiors and in urban environments, he also painted a number of landscape and flower pieces, such as White Petunia (1968). After experimenting with the technique in the late 1950s, from the mid-1960s he made a number of free-standing cut-out figure works painted on wood or aluminium, such as Rudy and Edwin (1968). Similarly, after early forays in the 1950s, Katz concentrated more on printmaking in the 1960s, making very simplified lithographs and screenprints, such as the screenprint Row Boat (1966). After the 1960s he continued producing similar figure paintings, such as Night (1976), as well as prints. He achieved great public prominence in the 1980s, and among the works of that decade were a number of multi-panel paintings, such as Pas de deux (1983) 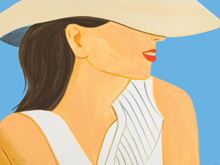 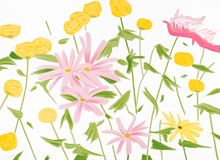 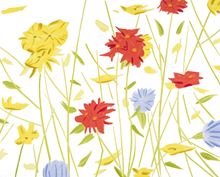 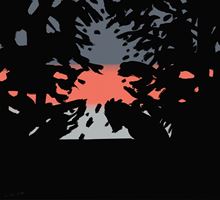 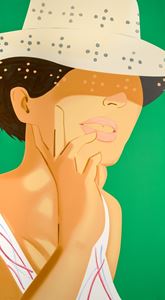 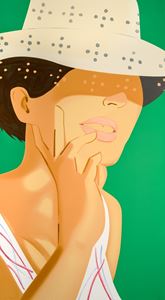 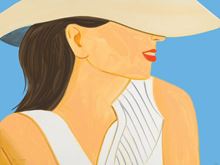