Lucio Fontana, was a key figure of the 1950s Avant-garde; he was born in Rosario di Santa Fè, Argentina and his parents had Italian origin. Fontana began his artistic training practising in his father’s studio as sculptor and studying at the same time at Carlo Cattaneo Institute of Milan, where he completed his engineering studies.
In 1924 he developed his interest on human figures and abstract shapes. In 1934 together with Fausto Melotti, Atanasio Soldati, Mauro Reggiani he joined the Paris artists group “Abstraction-Création”. Between 1935 and 1939 he devoted his time and energy to ceramic sculptures, working intensely at Albissola, on the Ligurian coast, at his friend Giuseppe Mazzotti’s studio. In 1946 the term Concetto Spaziale appeared for the first time in the titles of a group of drawings by the artist, a term that was to accompany a large part of his output after this date. Back to Milan, he signed the Manifesto dello Spazialismo with a group of young artists, according which the picture should “come out of its frame, the sculpture out of its glass case”, while in 1949 he started the “Buchi” series. In 1958 he came to create the famous “Tagli” series while numerous exhibitions were set in Italy and abroad. Lucio Fontana that belongs to the most important and most influential Italian artists, dies in Italy near Varese in 1968. 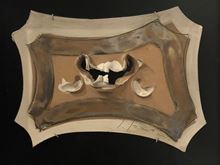