Pablo Picasso was born in a poor family in Málaga, southern Spain in 1881. After some early training with his father, a provincial drawing teacher, Picasso showed that he had thoroughly grasped naturalistic conventions at a very young age. After some incomplete sessions of art school in Barcelona and Madrid, Picasso spent his adolescence associating with the group of Catalan modernists who gathered at Els Quatre Gats in Barcelona. From there he moved to Paris, where he quickly found like-minded poets and painters. His work began to attract serious critical attention and praise by the time he was twenty.
His first mature work, dating from this time, around 1901, is classified as his Blue Period. He painted anecdotal scenes of clowns, vagrants, and prostitutes, all in tones of blue.
As Picasso spent more time in Paris, as his painting developed, and as he began to meet the right people, his mood lifted. His subject matter remained much the same, but his tones were warmer, or rosier, and the atmosphere of his paintings was gayer. He began also to acquire mistress-muses; the women in his life would be his most consistent inspiration. Unfortunately, while his girlfriends were such a valuable impetus to his art, they seldom emerged from their museships unscathed. Jacqueline Roque and Marie-Thérese Walter committed suicide, and Olga Koklova and Dora Maar became somewhat insane. While Picasso's relationships imbued life into his painting, they often destroyed the lives of the women involved.
Acquiring the valuable patronage of the American siblings Leo and Gertrude Stein, Picasso soaked in all the experimental energy of the Parisian art scene and, inspired by other French painters–especially Cézanne, and also the "primitive" art of Africa and the Pacific–Picasso began to create for himself a radically new style. "Les Demoiselles d'Avignon" (1907), perhaps the most revolutionary painting of the century, prepared the ground for Cubism, a style Picasso developed in collaboration with another painter, Georges Braque.
Demolishing the traditional conception of pictorial space, Picasso and Braque painted objects as facets of an analysis, rather than as unified objects; they wanted to paint as they thought, not as they saw. This period of their work is called Analytical Cubism, and Picasso's work in this style formed a kind of progression over the years.
Cubism's next innovation–again, a joint effort between Picasso and Braque–was Synthetic Cubism. Here, the defining characteristic was collage, a technique never before used in fine art. This new method allowed Picasso to play with the bits and pieces of modern life, the handbills and the newspapers and other such detritus of the metropolis, which had never before been satisfactorily incorporated into the visual arts.
Picasso made valuable contributions to art throughout his entire life, but it was the invention of Cubism that secured his immortality.

The Age of Early Modern Masters: Braque, Matisse and Picasso 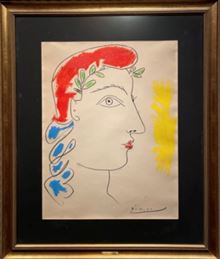