Jime Dine ia an American painter, graphic artist, sculptor, and poet who emerged during the Pop art period as an innovative creator of works that combine the painted canvas with ordinary objects of daily life.

His early work consists primarily of images on canvas to which three-dimensional objects (e.g., articles of clothing, garden tools) are attached. His reputation was secured during the 1960s by his wittily incongruous painted images of tools, clothes, and other utilitarian and household objects.

He is particularly associated with the bathrobe and the stylized heart. The subject of Dine’s work of the 1970s remained commonplace objects, but he showed a growing preoccupation with graphic media and exploitation of nuances of line and texture. 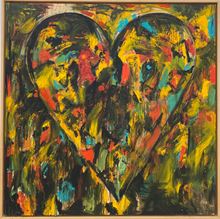