Attaching a singularly defining label to Larry Rivers has remained an elusive task for many who have tried to contextualize his over 50 year contribution to the arts. Rivers was an accomplished Jazz musician, a painter, sculptor, poet, actor, television personality, filmmaker, an MC at nightclubs, a popular personality on the lecture circuit, author and teacher. He’s been aptly referred to as “a renaissance man,” but perhaps he’s most often recognized and ironically at times equally underappreciated as one of if not the key founding fathers of Pop Art.

Andy Warhol never made it a secret that he was influenced by Rivers art, but in perhaps a more revealing quote from the book “Popism” Warhol recognizes Rivers unique persona as an influential ingredient in the development of Pop Art. Warhol said, “Larry’s painting style was unique – it wasn’t Abstract Expressionism and it wasn’t Pop, it fell into the period in between. But his personality was very Pop.”
In 1945, fellow musician Jack Freilicher showed Larry Rivers a painting by Georges Braque and in that same year after seeing the Cubist work, Rivers started painting. From 1947 to 1948 he studied in Hans Hofmann’s School of painting. Following his experiences with Hoffman, he continued his studies and in 1951, he received his BA in art education from New York University. Since graduating NYU in 1951, he received honorary doctorates from several other institutions.
In 1950 he met Frank O’Hara. This same year he took his first trip to Europe spending 8 months in Paris reading and writing poetry. Beginning in 1950 and continuing until Frank’s death in July of 1966, Larry Rivers and Frank O’Hara cultivated a uniquely creative friendship that produced numerous collaborations, as well as inspired paintings and poems. Beyond these more publicly recognized works, the two friends maintained a 15-year correspondence, exchanging numerous documents mostly comprised of letters with some poetry.
In 1957 his mother-in law Berdie Burger, subject of the famous work “Double portrait of Berdie” as well as the subject of many of Rivers other drawings and paintings died at age 66. This same year he and Frank O’Hara began work on “Stones,” a collaborative mix of images and poetry in a series of lithographs. This was the first project for Tatyana Grosman’s company ULAE. During this time he also appeared on the television game show “The $64,000.00 Question” where along with another contestant, they both won, each receiving $32,000.00. In 1958 he spent a month in Paris and played in various jazz bands.
Rivers continued to cultivate a strong interest in collaboration, working with the poet Kenneth Koch on the collection of picture-poems New York 1959-1960. In 1961 he met Jean Tinguely; together they produced several collaborative works, including the “The Friendship of America and France” shown at the Musée des Arts Décoratifs, Paris.
In 1966 Rivers designed the sets and costumes for Stravinsky's Oedipus Rex; a performance with the New York Philharmonic under Lukas Foss. Rivers set the opera in a boxing ring, and dressed the chorus in sleeveless undershirts and sunglasses; the production outraged critics and audience alike.
In 1976 he traveled to Russia at the invitation of the Union of Soviet Artists where he lectured in several cities on contemporary American art. Traveling with is son Steven Rivers, the two documented this trip; making videotapes along the way. Continuing to experiment with various mixed media, Rivers began producing works generated by combining color carbon paper, a technique that he demonstrated as a guest on the Dick Cavett show.
In 1978 he began work on the “Golden Oldies” series where, consistent with his efforts to investigate historical subject matter, he reexamines his own works of the 50’s and 60’s.
Building on his earlier experimentation's with three-dimensional works, Rivers developed a formula for creating three-dimensional relief paintings that focused on a broad range of subjects. He documented this technique in a film he made called “Duck Farm".

In 1949 he had his first one-man exhibition at the Jane Street Gallery in New York. This same year, he met and became friends with John Ashbery, and Kenneth Koch.
In 1951 Rivers’ works are shown by John Myers at the Tibor de Nagy Gallery where he continued to show annually (except 1955) for 10 years. A 1952 collaboration with Frank O’Hara included designing the stage set for O'Hara's play "Try! Try!".
In 1954 he had his first exhibition of sculptures at the Stable Gallery, New York. In 1955 The Museum of Modern Art acquired Washington Crossing the Delaware. This same year he won 3rd prize in the Corcoran Gallery national painting competition for “Self-Figure.” Rivers’ also painted “Double Portrait of Berdie” in 1955, which was soon purchased by the Whitney Museum.
Rivers first comprehensive retrospective in 1965 included 170 works comprised of paintings, drawings, sculptures and prints. The show toured five U.S. museums. Rivers prepared “The History of The Russian Revolution: From Marx to Mayakovsky” for inclusion at the final venue, an exhibition at the Jewish Museum. Of this work Rivers remarked: “it’s either the greatest painting-sculpture-mixed media of the 20th century, or the stupidest."
Throughout the early 80’s Larry Rivers’ works form the basis for several retrospectives, beginning in 1980 with the retrospective exhibition at Museo de Arte Contemporáneo de Caracas. In 1980-81 his works form the basis for the traveling retrospective exhibition: Kestner-Gesellschaft, Hannover Kunstverein, Munich Kunsthalle, Tubingen Stattliche Kunsthalle, Berlin. In 1983 The Guild Hall Museum, East Hampton, New York and Lowe Art Museum, Coral Gables, FL, exhibited a thirty-year survey.
Commissioned by Sivia Loria and Jeffrey Loria in 1984, Rivers worked from 1984-85 on the “History of Matzoh (the Story of the Jews)” - which was subsequently exhibited at The Jewish Museum, New York. In 2006, honoring Rivers’ desire to have this work exhibited in a more public venue, Jeffrey Loria donated “History of Matzoh” to Yale University.
In the 1990’s, Rivers work is either the subject of or included in a wide variety of comprehensive shows: A retrospective of his paintings and drawings, “Public and Private” opened at the Butler Institute of American Art in Youngstown, Ohio in 1990 and toured the United States until 1992. In the fall of 1991, he was featured in an exhibition “Pop Art” at the Royal Academy of Arts in London and in “American Realism and Figurative Art 1952-1991”, an exhibition that traveled to five museums in Japan. The exhibition “Copier/Créer de Turner á Picasso, 300 Oeuvres inspirées par les Maîtres du Louvre”, organized by the Louvre in Paris in 1993, included several of his works. “Hand-painted Pop: American Art in Transition 1956-62,” which originated at the Museum of Contemporary Art in Los Angeles and traveled to the Whitney Museum in New York in 1993, also included works by Rivers. One of his three dimensional works was selected for the exhibition “Slittamenti,” a segment of the 1993 Venice Biennale.
Rivers was also a central figure in the major exhibition entitled “Bop, Beat, and Beyond” in 1995 at Australia’s Museum of New South Wales. This show explored the connections between visual artists, musicians and writers of the beat period. He was also featured in the comprehensive exhibition “Beat Culture and the New America (1950-65)” at the Whitney Museum of American Art in New York in 1995.
In 2002 Larry Rivers was as busy as ever with a major retrospective at the Corcoran Gallery of Art in Washington, DC and a show of early works at Tibor de Nagy Gallery in New York in the spring. With another “Fashion Show” scheduled at Marlborough Gallery in the fall, Rivers continued working on fashion paintings up until three months before his death in August, 2002. Obituaries appeared in various newspapers and periodicals worldwide, with national coverage that included among others, Time Magazine and the front page of the New York Times, where they honored a formerly predicted front-page coverage of his passing. 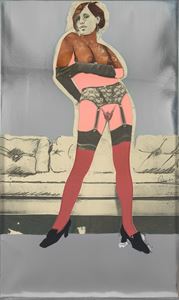