Lynn Chadwick was born in London in 1914. He trained as a draughtsman and in 1937 joined an architectural practice, designing exhibition stands for trade fairs.

During the war, Chadwick served as a pilot in the Fleet Air Arm. Afterwards he moved to Stroud, Gloucestershire and began constructing mobiles out of wire and balsa wood. He had his first one-man show in 1950 and in 1952 contributed sculptures to the British entry at the XXVI Venice Biennale. This was the exhibition that prompted the art critic Herbert Read to coin the phrase 'the geometry of fear' to describe the work of Chadwick and his fellow British contributors.

In the early 1950s, Chadwick began to concentrate on solid, free-standing sculptures. In 1956, Chadwick won the prestigious International Sculpture Prize at the XXVIII Venice Biennale, which secured his international reputation. Chadwick was appointed CBE in 1964, and continued to exhibit widely until his death in 2003. Tate Britain held a major Chadwick exhibition later in that year. 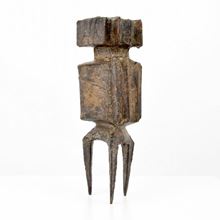