Antonio Sannino was born in Naples in 1959; he lives and works between Naples and Rome.
He inherited from his father his passion for art. This passion led him to deepen his studies by following the traces of great traditional Italian masters of landscape. In fact, it was the combination of his ambition to gain knowledge and the passion for travelling that made him visit various museums and artist studios throughout Europe. This was followed by a ten years residence in London.
He collaborates with the Square Gallery, the Fine Art department of Liquid Art System, since 2007. 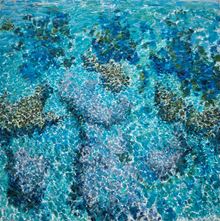