Dan Christensen was born in Cozad, Nebraska in 1942. He received his BFA in 1964 from the Kansas City Art Institute and currently resides in New York City. His early work was of a minimalist geometric style which he later abandoned due to its constrictiveness. He now works as an romantic minimalist, using spray guns and squeegees to create luminous canvases with abstract patterns floating on In 1967 Dan began using spray guns to draw colorful stacks, loops and lines on his paintings, that were among the most original abstract paintings of the decade. Having a unique mastery of the language of abstract painting color, line, surface, and a confident and gifted touch Christensen has used his ability to produce a varied and high quality body of work. By 1968, Christensen made a group of paintings that were colored rectangles and bars floating in a sprayed atmosphere of lyrical, multi-colored space. That year he also began his important series of loop spray paintings. Resembling colored pencil or ball point pen doodles on a note pad, made on a giant scale by a giant hand, these paintings are astonishingly primal and liberating. Painted mostly in thin sweeping lines of sprayed primary color on neutral canvas-colored grounds, these paintings are a remarkable achievement. He followed those paintings with another series of sprayed line paintings that were thick, thin, twisting, serpentine lines and arcs painted on richly colored fields.
Christensen's lucid and articulate ability to paint has led his fertile imagination into several radically different series. He has a willingness to change and grow and he has often altered his painting methods and his style. In the early seventies he made paintings with squeegees that were solid blocks of perpendicular color of different surfaces. Dan Christensen began exhibiting his paintings in New York City in 1966. He has had more than 60 solo exhibitions and his work has appeared in important group shows all over the world. His paintings are represented in important museums and private collections in the United States and abroad.


Dan has won numerous awards including the National Endowment Grant in 1968 and the Guggenheim Fellowship Theodora Award in 1969. His paintings are a part of major national and international museum collections such as the Chicago Art Institute and the Metropolitan Museum of Art. 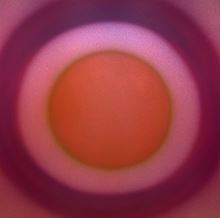