Gianfranco Meggiato was born on August 26, 1963 in Venice, where he studied stone, bronze, wood and ceramics sculpture at the Istituto Statale d’Arte.
At the age of 16 and then 21, he was selected by the Municipality of Venice to exhibit his works at the Galleria Comunale Bevilacqua La Masa in San Marco Square, where he presented three sculptures in Vicenza stone and semi-refractory clay.
In his work, Meggiato gets inspiration from great masters of the 20th century: Brancusi for his pursuit of the essential, Moore for the inside-outside relationship in his sculptures about maternity, Calder for the sense of space. Space, in fact, is a real element in Meggiato's work and empty parts become just as important as full parts.
The artist shapes his sculptures inspired by biomorphic tissue and the labyrinth, symbolizing the tortuous path of humanity looking for its essence, and revealing his precious soul. Meggiato thus invents the concept of “introsculpture” in which the observer point of view is drawn towards the inner part in the artwork, not only restricting on the surface. «On a formal level, space and light don't define the work, sliding over it as if it were in-the-round; they indeed penetrate inside it, wrapping its lattices and tangles, reaching the central sphere point as as a quintessential point of arrival»
Starting from 1998, Meggiato has taken part in many exhibitions and art fairs all over the world, including USA, Canada, Great Britain, Denmark, Germany, Belgium, Holland, France, Austria, Switzerland, Spain, Portugal, Principality of Monaco, Ukraine, Russia, India, China, Arab Emirates, Kuwait, South Korea, Singapore, Taipei, Australia.
In 2007 he exhibited monumental sculptures at OPEN 10 International Exhibition of Sculptures and Installations, in Venice; between 2007 and 2009 he was active with many personal exhibitions as in the National Museum of Musical Instruments in Rome; Palazzo Senato in Milan; Museo Correr (Marciana Library) in Venice. In 2009 he was at the Exhibition of Monumental Sculptures “Plaza” Milan, 20th anniversary of the fall of the Berlin Wall. In 2010 he put an installation of a monumental sphere on the Breath Building GEOX, Milan and he was asked to propose a solo exhibition at UBS BANK, Lugano. In 2011 and 2013 he was invited to exhibit his artworks at the Venice Biennale. In 2012, during Art Bre at Cap Martin, his Sfera Enigma (6 meters height) was presented to Prince Albert of Monaco and then installed at the port of Monte Carlo.
In 2014 the Lu.C.C.A. Center of Contemporary Art held a solo exhibition and invited him to participate in the collective “The restless twentieth century Vedova, Vasarely, Christo, Cattelan, Hirst and the Genesis of Third Millenium ”.
In December 2016 he exhibited a monumental sculpture Sirio Sphere (2 meters of diameter) in the Bayfront Park in Miami.
In February 2017 a retrospective with more than 50 artworks was inaugurated at the Nuova Scuola Grande della Misericordia in Venice; in the same year, in June, the MARCA museum of Catanzaro presented a great exhibition about his work, in four of the most important locations in the city: MARCA, Scolacium, MUSMI and MARCA Open with the “Garden of the Silent Muses”: an installation with a diameter of 20 meters hosting 8 monumental sculptures in a labyrinth composed of 4000 juta sandbags. “My Free Thought", 3,00 mt. High, was the most majestic piece: he was located permanently in the International Sculpture Park, near a Tony Cragg's sculpture.
In August 2017 he made the scenography for the Opera "CARMEN" for the Scolacium Archaeological Park. In the same month Meggiato was selected to exhibit for the 20th anniversary of OPEN 20 International Exhibition of Sculptures and Installations, in Venice in conjunction with the Venice Film Festival. In October 2017 Gianfranco Meggiato received the prestigious ICOMOS-UNESCO award for having masterly combined the ancient and contemporary style in sculptural installations of strong evocative power and aesthetic value. More over, in the same month, in Pistoia - Italian Capital of Culture 2017-, he was invited to exhibit in the cathedral square with its installation “My Free Thought -The Silent Muses". 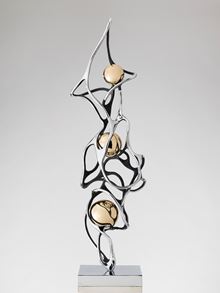