Indiana was one of the preeminent figures in American art since the 1960s. He has played a central role in the development of assemblage art, hard-edge painting and Pop art. A self proclaimed “American painter of signs,” Indiana has created a highly original body of work that explores American identity, personal history and the power of abstraction and language, establishing an important legacy that resonates in the work of many contemporary artists who make the written word a central element of their oeuvre.

One of the central figures of the Pop Art movement, Robert Indiana takes his inspiration from commercial signs, claiming: “There are more signs than trees in America. There are more signs than leaves. So I think of myself as a painter of American landscape.” In his paintings, sculptures, and prints, he mimics and re-arranges the words and numbers of a myriad of signs, including the Phillips 66 gas station logo and the “Yield” traffic sign. He is most famous for his “LOVE” paintings and sculptures, first produced in the 1960s. Creating a block out of the word—with the “L” and the “O” set atop the “V” and the “E”—Indiana has effectively inserted his own sign into the mix. 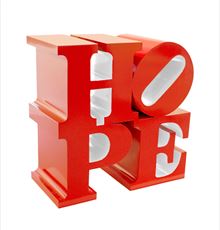 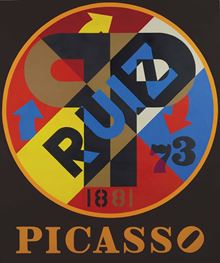 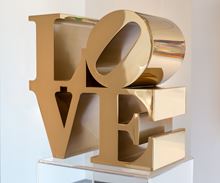