Jeffrey Wasserman was born in Westchester County, New York to parents who were first-generation Americans, both of Russian Jewish descent. As a young teenager, Wasserman discovered a copy of Art Treasures of the Louvre that inspired his initial foray into the arts, and he made regular trips into Manhattan to visit museums and feed his growing passion. In high school, he began art classes with the Color Field painter Friedel Dzubas, who introduced the young student to the dominant figures of Modernism, from Willem de Kooning’s gesture to Hans Hoffman’s color theory. Wasserman then attended the Tyler School of Art in Philadelphia, receiving his BFA in Painting in 1968. After a brief stint in London, Wasserman returned to New York after his father’s sudden death. Subsequently, the abstract painter Edward Avedisian hired him as a studio assistant. When Avedisian moved upstate, he sold his Lower East Side studio to Wasserman, positioning the young artist at the heart of the 1970s SoHo scene.

Wasserman, like many of his contemporaries, injected a sense of playfulness and jest into his paintings through the use of color, discordant yet dynamic space, and cartoonish forms. What separated Wasserman’s painting during the 1970s from that of his peers was his engagement with and representation of the vibrancy found in the mundane and everyday. His paintings sought to affect the viewer by evoking memories of common lived experiences de-familiarized through abstraction. In the early 1990s, Wasserman moved to upstate New York. The change in environment altered his style—the reoccurring motifs that occupied his abstract compositions of the 1980s faded behind a condensed allover field of scumbled and scraped pigment, transforming the Hudson River Valley into a new sublime.

As an artist, Wasserman was determined to expand the limits of painting. He enjoyed an enduring engagement with the properties and problems of painting, and reveled in the process. This drive led patrons and artists alike to refer to him as “a painter’s painter.” Wasserman’s work continues to resonate with viewers today, emphasizing the truth behind the artist’s words, “Abstraction entails an endless language free of traditional visual boundaries. [The] abstract painter [only scratches] the surface; the possibilities stretch into what [is] a reassuringly limitless future.” 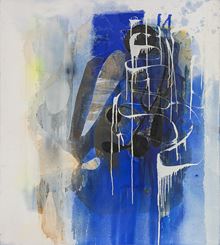