Alighiero Fabrizio Boetti was born in Turin 1940. Boetti abandoned his studies at the business school of the University of Turin to work as an artist. Already in his early years, he had profound and wide-ranging theoretical interests and studied works on such diverse topics as philosophy, alchemy and esoterics. At seventeen, Boetti discovered the works of the German painter Wols and the cut canvases of Argentine-Italian artist Lucio Fontana.
From 1963 to 1965, Boetti began to create works out of then unusual materials such as plaster, masonite, plexiglass, light fixtures and other industrial materials. His first solo show was in 1967, at the Turin gallery of Christian Stein. Later that year participated in an exhibition at Galleria La Bertesca in the Italian city of Genoa, with a group of other Italian artists that referred to their works as Arte Povera, or poor art, a term subsequently widely propagated by Italian art critic Germano Celant.
Boetti continued to work with a wide array of materials, tools, and techniques, including ball pens (biro) and even the postal system. Some of Boetti’s artistic strategies are considered typical for Arte Povera, namely the use of the most modest materials and techniques, to take art off its pedestal of attributed “dignity”. Boetti also took a keen interest in the relationship between chance and order, in various systems of classification with grids and maps, and non-Western traditions and cultural practices, influenced by his Afghanistan and Pakistan travels.
His fascination with doubles or twins with his own examination into self-identity brought him to call himself Alighiero and Boetti. As in two personalities even forcing himself to paint with the opposite hand.
Active as an artist from the early 1960s to his premature death in 1994, Boetti developed a significant body of diverse works that were often both poetic and pleasing to the eye while at the same time steeped in his diverse theoretical interests and influenced by his extensive travels. 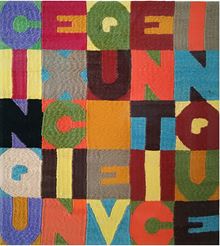