Erin is a contemporary figurative artist working and living in Toronto, CA. Her work looks into the human imagination as it is expressed visually. She is particularly intrigued by the ways in which the mind can conjure and create worlds by piecing together memory, experience, and the ability of the mind’s eye to render a non-reality. She draws on the genre of portraiture as a foundation for these explorations, but chooses to depict not a person or sitter, but an atmosphere or sensation expressed inside the formal qualities of human shapes.

She was named Saatchi’s “Ones to Watch”, Designlines magazine called her one of “Toronto’s Art Stars” and BlogTO counted her as one of the years “Most Talked About Artists'”. She has created work for clients such as Nike, The Drake Hotel Toronto and Drake Devonshire, Anthropologie, The Broadview Hotel, Portia De Rossi and Ellen Degeneres’ “General Public Art", Hulu’s “The Handmaid’s Tale”, and Kit+Ace.

Her work has been exhibited extensively throughout Canada and the United States as well as England, Australia, Scotland, Switzerland, and Sweden. 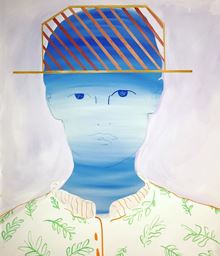