Jean-Marie Fondacaro was born in Nice in 1956. Attached to his native cradle, he chose to stay there to live and work. By his own admission, he has always had the act of carving rooted in him since childhood. Primary confrontation with matter has led to a form of inner and spiritual searching and truth. His work questions the place of the human and the living on earth. The representation of the human form is rarely isolated. The artist prefers it resonating with external and organic elements, or by the multiplicity of bodies. From her work, Evelyne Artaud, Critique d’art, expressed herself in these terms: «It would be at this nodal point of the threat of an even disappearance of the form, that arises today the necessity of an incarnation in the body that multiplies itself, agglutinates, solidarizes, merging, cloning, resumes this initial movement in a new direction, reviving the first gesture, reactivating thought from another point of view, no longer that of a slenderness, become painful and vain, but that of a reversal, of a revolution which no longer takes the work as an object, but confers on it that of a subject, whether it be multiple, anonymous, like a cohort where the solitudes are knotted together into a monstrous conglomerate whose absurd movement would be the ultimate effort to find the meaning of this desperate flight. «
The artist’s recent sculptures deal with the notion of balance: tensions, relaxation, «motionless mobility». The man is at the same time rooted in the ground and rooted in the sky, motionless and yet on the move. He is often represented in groups, some anchored, the others in suspension, but all linked to each other around this axis of common life, as evidenced by his installation «People» presented at Villa Tamaris in 2017, then at the Bogéna Gallery in 2018.
Jean-Marie Fondacaro has been the subject of many solo exhibitions in France (in Paris, Nice, Saint-Tropez, Saint-Paul de Vence in particular) but also internationally (in Switzerland, Saudi Arabia, Germany) 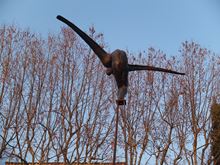