American artist, Malcolm Liepke was born in 1953 and raised in Minneapolis. He is an experienced, mid-career painter who has exhibited all over the world; his work is represented in numerous private and public collections. Liepke paints with an assured, expressive and fluent handling of his medium. His frank enjoyment of the texture of male and female flesh is fully embodied in the rich and luscious quality of the oil. Thick, clotted and sticky passages contrast with slick, fluid glazes. Cream-like paint is laid down in planes of acidic, pastel hues of greens, blues, pinks, purples and oranges, making dramatic contrast with descriptive areas of pale skin-tones. His responsive manipulation of the brush and medium subtly reacts to the contour and surface of the subject, articulating a world of sensation. The compositions speak of an interior, artificially-lit, urban world: a locale of bars, nightclubs, studios and house-parties. This is a milieu familiar to us from the paintings of Degas, Lautrec, Manet, Hopper, Sargent and many others. Liepke, painting his contemporary cast of provocative characters, makes a connection with the past and presents us with an archetypal portrait. 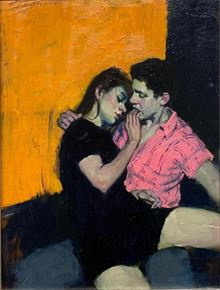