Emil Alzamora, a British Citizen, was born in Lima, Peru in 1975 and grew up in Boca Grande, Florida and Majorca, Spain. He attended Florida State University where he graduated Magna cum Laude in 1998 earning a Bachelor’s Degree in Fine Arts.
Emil Alzamora’s minimalist sculptures represent the human body in its most pure form. His sleek, polished figures are anonymous yet identifiable; they lack any sort of distinct facial features or differentiation of gender, but simultaneously symbolize a universal understanding of and connection with the human body in its various manifestations. They are reminiscent of the slender, elongated figures of Giacometti or the intimate, abstract sculptures of Brancusi, yet are unique in their refined curvature, urbane presence, and contemporary appeal. Alzamora started his sculpting career in the Hudson Valley of New York working with Polich Tallix in the fall of 1998. Since his departure from the art foundry in early 2001, he has produced his work full-time and shown regularly throughout the world. Alzamora’s works have been exhibited in multiple solo and group shows, many national and international art fairs as well as the Knoxville Museum of Art, The Royal West of England Academy in Bristol, the United Nations Building, Pepsico World Headquarters, The Queens Museum of Art, The Hudson Valley Center for Contemporary Art, and The Museum of Biblical Art in Dallas. His work has been reviewed by publications such as The New York Times, The Brooklyn Rail, The L Magazine, El Diario, Boston Metro News, Juxtapoz, High Fructose, ArteFuse and Cool Hunting. He currently lives and works in Beacon, NY. 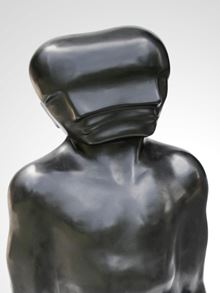