Born in Korea in 1963 and having attained his Masters in Fine Arts from Keimyung University, Korea, in 2007, the adept Lee Jungwoong never fails to astound. Using Korean rice paper and Western oil paint he brings poetic and almost literal life into his subjects. His Chinese brushes and ebony ink splotches, swipes and bleeds showcase dynamism and motion that far surpass a simple two-dimensional image. They are accompanied by gleaming wood and brush hairs visible in the coarseness of every individual strand. The amount of detailing renders his works flawless, sometimes causing viewers to lean in, trying to find the brushstrokes that created the glossy smoothness of the handles, the soaked transience of the paper and the compliance of every brush hair. His choice of western style and paint to depict a Chinese object is as much a play on culture contrasts as it is a reflection on the artist and his subject. Lee Jungwoong’s works are hence multifaceted in both meaning and visuals – their magnificence is only amplified by the variety of interpretations. The artist’s ‘Brush’ series has found worldwide success; Jungwoong has had his works exhibited in several solo and group exhibitions in countries such as America, Switzerland, Singapore and Spain, and has featured in auctions by Sotheby’s and Christie’s. He is becoming an increasingly sought-after artist found in prestigious collections the world over. 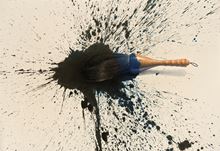