Artist statement:
"My work explores patterns in nature that exist at the extremes of scale. Using the shapes of diseases and cures, maps of the universe, or the molecular structure of pollutants – in short, microscopic or macroscopic “landscapes” – it depicts a physical reality that is invisible to the naked eye. In rendering these forms in drawings and paintings the subject is removed from a purely scientific context and introduced into the arena of visual culture. There the possibility is presented of forming a new relationship with the subject at hand: to see, for example, whooping cough or pneumonia not simply as scourges in human history, but as phenomena to be appreciated on their own terms. As that investigation has continued another layer has evolved. These series of drawings and paintings also depict structures that occur in nature at a level hidden to the naked eye, but these images of the microscopic are now also used as building blocks to create a composition to which they are conceptually related. One level of the subject at hand forms a composition representing another level of that thing or idea. These microscopic yet fundamental parts of our physical universe are placed in the broader context of history and art and the stories that we create around them by the composition they form. One level is clinical and physical and one is emotional and historical."

Kysa Johnson was born in Illinois in 1974, and trained at Glasgow School of Art in Scotland. Johnson has had solo exhibitions at institutions such as The Aldrich Museum of Contemporary Art (Ridgefield, CT), The National Academy of Sciences (Washington, DC), Roebling Hall Gallery (New York, NY), and The Nicolaysen Museum (Casper, WY). She has been featured in a number of group shows including exhibitions at The 2nd Biennial of the Canary Islands, the Tang Museum (Saratoga Springs, NY), The Katonah Museum of Art (Katonah, NY), the Hudson River Museum (Yonkers, NY), DeCordova Sculpture Park and Museum (Lincoln, MA), and Standpoint Gallery (London, UK). Johnson has created site-specific installations for KK Projects in New Orleans, LA (2008), Dublin Contemporary in Ireland (2011), and for the New York Armory Show, (2013). She is a 2003 NYFA fellow, 2009 Pollack Krasner Grant recipient, and lives and works in Los Angeles, CA. 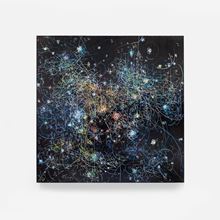