“The pictures I make are of something as yet unseen, which may only exist on the paper surface, or subsequently may be found in the world. I am seeking a state of mind which lifts the spirit, gives strength and a moment of clarity.”

Garry Fabian Miller was born in Bristol in 1957. In 1974 he undertook an intensive study of the remote island community of the Shetlands, an experience that strengthened his interest in rural communities, and his developing ideas about the potential of an artist’s life lived outside the mainstream of metropolitan culture. The importance of place has since become a predominant theme and was at the heart of his first major body of work Sections of England: The Sea Horizon in 1976: forty photographs taken from a fixed point on the roof of his home overlooking the Severn Estuary in which the photographic elements of lens and film and exposure remained constant so that the only change from frame to frame was in the time of day and the weather. The cumulative series presents a powerful study of time and place and were first shown as part of the Midland Open Exhibition at London’s Serpentine Gallery in 1977 and in a fuller form in his first solo exhibition at the Arnolfini Gallery in Bristol in 1979.

In 1980, Fabian Miller moved to Lowfield Farm in a remote corner of Lincolnshire and since 1984 he has worked without a camera, using the techniques of early nineteenth century photographic exploration to experiment with the nature and possibilities of light as both medium and subject. Since 1992 he has explored a more abstract form of picture-making by passing light through coloured glass and liquid and cut paper forms. In parallel he has explored the ideas of exposure, the quantities of light that are required to make things visible, or invisible, in the making of a picture. In sharp contrast to the photographic norm of exposures that last for a fragment of a second, Fabian Miller’s work tends towards long exposures lasting anywhere between one and fifteen hours. These unusual methods create alternative, luminous realities that shift from pure abstraction to imagined landscapes of the mind and the resulting pictures have tended to appear from the studio in series, each image leading to the next.

As these various series evolved so did their scale and complexity: the finished pictures often forming large grids made up of several connected elements. In 2006, partly as a reaction against the physical and technical challenges of these composite works, and partly in response to the threat posed to his methods by the digital age (specifically the demise of light sensitive Cibachrome paper) Miller began an intense period of working on a smaller scale. Referred to as Year One and Year Two – this period of free experiment collated his accumulated knowledge into a body of work that presented a pattern book of ideas for the future. 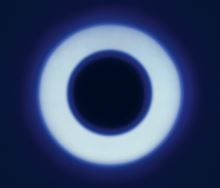