After completing his studies at the Ortisei Art Institute, Peter Demetz began an apprenticeship under Maestro Heinrich Demetz and earned his Master's Degree in sculpture. In the years since, he has participated in a number of exhibitions in Italy and abroad, including Austria, Germany, the United States, Belgium, and Turkey.

From 1999 to 2001, Demetz studied education, teaching, and the psychology of learning and development, and has been teaching courses and seminars on wood carving since 2001. From 2002 to 2006, he was Head Teacher for the Art Sculpture Course at Germany's Lignea University of Zwickau, as well as the Schneeberg's Faculty of Applied Arts and the Daetz-Centrum in Lichtenstein. Between 2007 to 2010, Demetz won major awards in art shows including "III Trienale Ladina", the "Arciere Award", and the "XVIII Sulmona Prize ".

Considered on of the most interesting contemporary sculptors, Demetz has been actively supported by organizations including the Swarovski Design Center, Wattens, the LKJ-Sachsen Leipzig, and Daetz-Centrum in Lichtenstein.

Demetz' installations push beyond the framework of daily life, capturing the simple gestures and unique poses of his subject, who are often large, balding, and overtly masculine men. His female subjects are represented down to the smallest detail, bringing out the inherent femininity of their accessories, hair, and clothing. Both his male and female subjects are carefully wrought to underline their average status, and specific characteristics indicating their age or social class are underplayed to allow the observer to focus on their essential being, or soul.

Subjects are often rendered from behind, as the author tries to preserve a sense of privacy while at the same time "stealing" a snapshot of his subject. There is never eye contact between the subject and the observer, giving the impression that these figures are trapped in their own world: they are aware of being observed, yet leave an empty space between themselves and the observer.

Demetz communicates a strong sense of soul-searching in his works, which capture subjects in intimate yet mundane moments during which the true nature of existence is often contemplated. 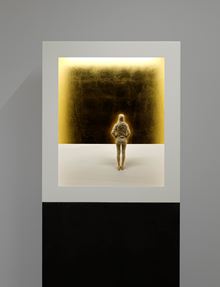