Sergio Mora (Barcelona, ​​1975), also known as MAGICOMORA, is a painter, illustrator and draftsman.

Winner of the Latin Grammy for the Best Design 2016 for “El poeta Halley” of Love of Lesbian.

He recently designed the murals at the chef’s Bazaar Mar restaurant is José Andrés, designed by Philippe Starck in Miami.

In 2017 he returned to collaborate with Starck for a second restaurant in Park Avenue, New York.

“MORALAND is a country ruled with an iron hand by Sergio Mora, the terrible dictator which forces its citizens to live in extreme poetry, mortal luminosity, totalitarian mood, laborious elegance, dangerous benevolence, and amusing absolutism. Worse, that state is a state of being. A state condemned to sublime happiness. The rest of the world is worried. “ 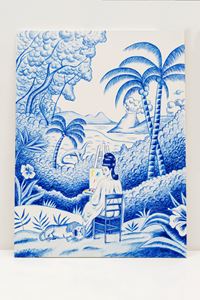