Luciano Ventrone (Rome 1942-2021) attended Liceo Artistico in Rome. After graduation in 1946 he started studying Architecture. In 1968 he left the University and focused on painting.
Even though Luciano Ventrone is internationally recognized as one of the master realist painters of his generation, he believes that his works are really about optics: “Painting is not about the mere representation of an object, but its colour and light,” he says. “The subject cannot be seen as it is but as an abstract element.” Ventrone studied at Rome’s Liceo Artistico and—in spite of experimenting with avant-garde methods—garnered attention for his academic realism and attention to anatomical detail; his life drawings would be published in a university textbook on human anatomy. Ventrone’s paintings still frequently feature nudes, as well as carefully arranged still lifes. For each of his works, Ventrone carefully stages his subject under bright studio lights, and photographs the arrangement for painting reference.
Luciano Ventrone’s paintings ‘invite a mood of pure contemplation’ from the viewer; they are works of masterful skill and supreme aesthetic beauty. Though he admits sharing a strong affinity for the work of Caravaggio, Ventrone does not consider himself a realist painter in the traditional sense. He paints real objects but, because of his utilisation of certain contemporary techniques as part of the artistic process, the objects depicted are transported into a metaphysical, hyper-real context. What we see in a Ventrone painting is not ‘real’ because it is not what we would see were we to look with the naked eye – We see more. Ventrone shows us things more fully and more clearly than they appear to us in reality; everything is in focus, everything can be scrutinised. He allows us to notice every blemish and admire every curve of flesh in a piece of fruit or on a naked female form. Set against monochromatic backgrounds of white, grey or black, the subject is lit from multiple angles, allowing for a full and objective appraisal of what we behold.
He did important personal exhibition all over the world in public and private spaces and his artworks are in important private and public collections. 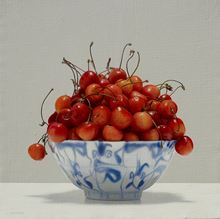