Holton Rower was born in Greenwich Village in 1962, the grandson of artist Alexander Calder. He has exhibited in New York at The Pace Gallery, John McWhinnie and The Hole, as well as internationally including England, France, Spain, and Switzerland. He currently lives in Brooklyn Heights and has a studio in lower Manhattan. 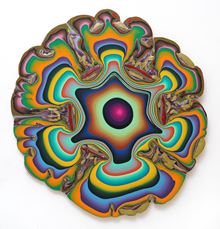