ESTEBAN VICENTE was born in Turégano, Spain in 1903. His father was an army officer and an amateur painter who took the young Vicente with him on visits to the Prado Museum. In 1920, Vicente entered military school, but left after three months. Eighteen years old, Vicente began at the School of Fine Arts of the Real Academia de San Fernando in Madrid. As a young man living in Madrid, Barcelona and Paris, he developed friendships with artists and writers. In 1928, he had his first exhibition with Juan Bonafé at the Ateneo de Madrid.

He spent a good portion of his career teaching. He was among the faculty at Black Mountain College, Black Mountain, NC; the New York Studio School of Drawing, Painting and Sculpture, New York, New York and the University of California, Berkeley, among others institutions.

At the end of his life, the Museo de Arte Contemporáneo Esteban Vicente, a museum in his honor, was opened in Segovia by the Spanish government. Vicente attended the museum’s opening in 1998.

Vicente died at the age of 97 in 2001 in Bridgehampton, New York, 10 days before his 98th birthday. He had a long and prosperous career, living and working with multiple generations of artists and painting well into his 90’s at his home in Bridgehampton. 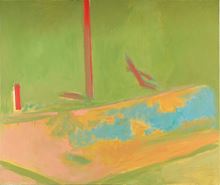