Hans Hofmann was enormously influential as both a teacher and a painter. He is often cited as one of the key figures of Abstract Expressionism. He always maintained that his paintings were all about painting as a medium and as such each brushstroke, line, colour and so on was loaded with meaning and purpose.

Hofmann was raised in Munich where he studied at various art schools. From 1904 to 1914 he lived in Paris where he met many of the leading figures of Fauvism, Cubism and Orphism (a movement similar to Cubism practised by Robert Delaunay and others). In 1915 he set up an art school in Munich and went on to teach there for 17 years. Two years after emigrating to the US, he established the Hans Hofmann School of Fine Arts in New York in 1934. Then a year later began a summer school at Provincetown, Massachusetts.

In 1958 after gaining a huge reputation as a teacher, he took up abstract painting full-time. He worked in many different styles but is best known as the pioneer of drip painting more popularly associated with Jackson Pollock. Later his paintings were to feature large rectangular blocks of solid colour on a fragmented background.

"Depth in a pictorial plastic sense is not created by the arrangement of objects one after another toward a vanishing point, in the sense of Renaissance perspective, but on the contrary by the creation of forces in the sense of push and pull." Hans Hofmann. 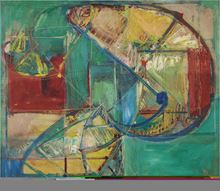