One of the most important artists to emerge in Britain in the 1960s, David Hockney first gained attention while he was a student at the Royal College of Art in London. Hockney was featured in the 1961 edition of the annual Young Contemporaries exhibition at Whitechapel Art Gallery, which heralded the arrival of the new Pop aesthetic in the UK. In 1964 he moved to from London to Los Angeles and began painting scenes of Southern California life – rolling hills, swimming pools and modernist architecture – that were often infused with homoerotic themes. He also focused on landscape, in paintings, collages made with Polaroid, mural-scaled horizontal format landscapes and stage sets. Hockney has continued to investigate the relationship between perception and space as well as technology in a series of iPad drawings.

A major retrospective of his work organized by the Tate Britain, the Centre Pompidou and the Metropolitan Museum acknowledged the artist’s long career, which continues. Still active at age 80, the artist is represented in major collections around the world including notable holdings by the British Museum, The Metropolitan Museum of Art and the Hayward Gallery. For those collecting Hockney the market remains positive. According to Sotheby’s Mei Moses, the average compound annual return for Hockney resold at auction between 2003 and 2017 was 10.7% and 80.8% of 52 such works increased in value.

Dog Etching No. 3, from Dog Wall 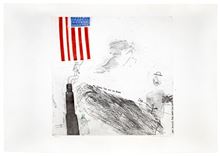 My Bonnie Lies Over the Ocean 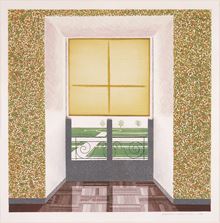 Contrejour in the French Style 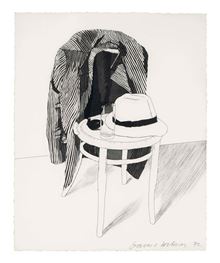 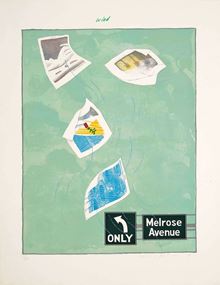