When American Pop artist Roy Lichtenstein painted Look Mickey in 1961, it set the tone for his career. This primary-color portrait of the cartoon mouse introduced Lichtenstein’s detached and deadpan style at a time when introspective Abstract Expressionism reigned. Mining material from advertisements, comics, and the everyday, Lichtenstein brought what was then a great taboo—commercial art—into the gallery. He stressed the artificiality of his images by painting them as though they’d come from a commercial press, with the flat, single-color Ben-Day dots of the newspaper meticulously rendered by hand using paint and stencils. Later in his career, Lichtenstein extended his source material to art history, including the work of Claude Monet and Pablo Picasso, and experimented with three-dimensional works. Lichtenstein’s use of appropriated imagery has influenced artists such as Richard Prince, Jeff Koons, and Raymond Pettibon. 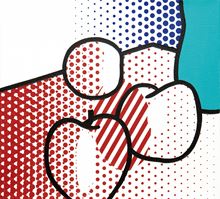