Jorge Rios (b. 1988, Cuba) is a contemporary artist who works mainly on Painting and Drawing. He graduated from San Alejandro’s Fine Arts Academy in 2007. After a year working at the conservation and restoration department of the Cultural Heritage Office of Havana, he assumes the position of Painting and Drawing professor at the San Alejandro’s Academy where he took the duty of Chairman of the Latin American Department until 2010 when he quits the pedagogical work to focus entirely on his artistic career.

His first solo exhibition comes in 2011 with the show Living is Easy with Eyes Closed. In this exhibition Rios explored through the artistic manipulation of the residual images visualized in the brain after we close our eyes, the idea of resignation, submission and negation as both, a critic to the social environment of the communist regime in Cuba and a comment to the ontological incapacity of human beings to transform and affect reality. A similar topic would follow his next exhibition at the 11th Havana Biennale: Ode to my Generation in a more satiric tone, consisted on a series of paintings about the flamingo’s pond at the local zoo of Havana. After this show, he abandons the contextual and social subjects and focus only on some more universal and philosophical motifs. Examples of this are exhibitions like The Flies at García Squared Contemporary in 2015 and more recently Cellar Door, at Cevor Art Gallery,where he investigates the dynamics between banality and beauty and their significance within the aesthetical experience. Jorge Rios lives and works in Miami, Florida. 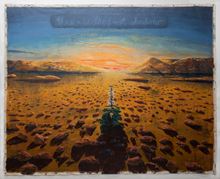 This Was the First Shadow