FRIEDEL DZUBAS was born in Berlin in 1915. He left Germany in 1939, moving to Chicago, where he found work as an illustrator. By the late 40’s, he settled in New York City and became associated with some of the leading young painters of the time. Jackson Pollock was his close friend, and he shared a studio with Helen Frankenthaler.

He had his first show at the Tibor de Nagy Gallery in 1952. Several years later, the critic Stuart Preston, writing in the New York Times, admired his “airy explosions of shape and color,” which could bring to mind storms and sea swirls. By the late 50’s and early 60’s, his art could also be described as “ a sort of delightful rococo postscripts to the baroque thunder of Abstract Expressionism,” as the critic Brian O’Doherty put it in The Times.

During the mid-60’s Mr. Dzubas painted hard-edged blocks of color. But he soon returned to a more expressive and improvisational manner that sought to bridge the contemporary concerns of American abstraction with his European past. He especially admired the Romantics, and his art was sometimes linked in spirit to the German Romanticism. 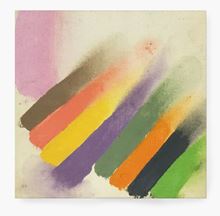