One of the most influential photographers of the latter half of the 20th century, William Eggleston is often credited as one of the pioneers of color photography. He captures mundane, often banal subjects, elevating color itself as subject and in importance. Although black and white prints, this suite of photographs, taken at an afternoon party in 1970, showcases Eggleston’s keen eye and storytelling talents, and predate his recently-acclaimed nightclub work.

Eggleston (born 1939) is a native of the Mississippi Delta and attended Vanderbilt University but never graduated. Instead, he learned from books by Walker Evans, Henri Cartier-Bresson, and Robert Frank, beginning his career with black-and-white images. He all but abandoned that medium in the 1970s to experiment with color film. That seminal work challenged the public perception of color photography, elevating the medium from commercial advertising and tourist snapshots to fine art. 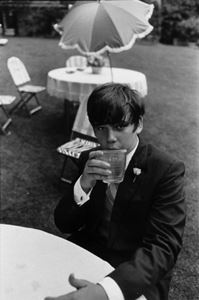