Paul Rousso (b.1958) is an American visual artist based in Charlotte, North Carolina. He received his formal training at the Cleveland Institute of Art in Ohio, before completing his studies at California College of the Arts in Oakland. Rousso has had a storied career working in interior design, drawing plans for the homes of notables such as Robert De Niro, and in art direction on New York’s Madison Avenue, producing advertisements for Revlon, Condé Nast, and Bloomingdales. Since the 90s, Rousso has devoted his expertise to art-making full time, focusing on his signature, large-scale sculptures of everyday objects. 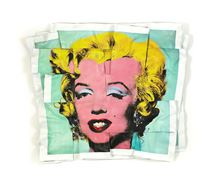