Kate Norris tears up floral, toile, and Chinoiserie wallpapers separating each vignette or object and combines fragments to create wholly new images that are disconnected from the wallpaper’s original subject matter. Toile patterns historically feature pastoral scenes from travels abroad, farm life, and hunting scenes in the country, printed in one color in repeat on a light background. Chinoiserie is similar, but its designs do not repeat—they are more like a mural—and depict European ideas of what the exotic Far East might look like. Toiles, in particular, are popular today and one can find contemporary toile patterns that show everything from Queen Elizabeth’s Diamond Jubilee to The Mandalorian. In Norris’ hands, the ripped fragments tell myriad stories through new juxtapositions that aggregate to form a greater whole, often larger-than-life figures and heads seen as anatomical skeletons or flayed bodies. Using wallpaper imagery meant to be pleasant reminders of one’s leisure travels or favorite things and transforming it into anatomical specimens creates cognitive dissonance. At once beautiful and thoughtful, the images are also stark. The collages shatter the societal complacency contained within the wallpaper’s imagery and transform into a universal common denominator: our physiology and shared humanity. In a way, viewers can decide on the level of interaction: they can get involved in the micro scenarios up close or take in the whole image from a distance. Or thrill at both.

Norris earned a BA at Stanford University, Palo Alto, California, and an MFA in painting at the School of Visual Arts in New York, New York. She lives and works in Baltimore, Maryland. Her work has been exhibited in San Francisco, Tampa, New York, and Baltimore, and can be found in private collections nationally and internationally. 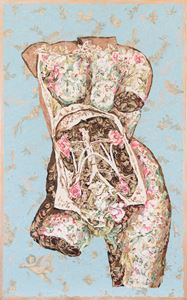